Acupuncture is one of the oldest treatment methods in the world. It is also probably the most widely recognised form of so-called complementary and alternative medicine (CAM) which also includes homeopathy and herbal medicine.

It is known to have been practised at least 5,000 years ago. It is one of the main forms of traditional Chinese medicine (TCM) and is typical holistic medicine.

What is holistic medicine?

Holistic medicine considers the functioning of the patient as a whole. It thus tends to differ from the Western concepts under which individual body components tend to be considered separately and treated accordingly.

What is the background of veterinary acupuncture in Australia?

Acupuncture has been the mainstay of TCM for centuries. It was introduced to the Western world in the 1920s. Veterinary applications were recognised in the 1950s and these have grown rapidly. It is now a widely accepted form of both complementary and, in some cases, alternative therapy and is regularly used by veterinarians in this country.

What is it used for?

Its main veterinary application is perhaps effective pain control, particularly in cases of intervertebral disc disease. Today acupuncture is used to treat a wide range of acute and chronic conditions and spans all organ systems.

"Today acupuncture is used to treat a wide range of acute and chronic conditions and spans all organ systems."

Acute conditions including vomiting, diarrhoea, disc prolapse and back pain have all been successfully treated.

It is also used in Australia for the relief of chronic conditions, particular muscular and skeletal pain. Perhaps less well known is its use as a method of organ support in the case of chronic problems involving bowel, liver, kidneys, pancreas etc.

In addition many owners have found acupuncture useful to assist recovery from paralysis involving areas as diverse as the bladder, limbs and larynx.

Traditionally in cases of convulsive seizures (epilepsy) owners report improvement without the side effects often associated with traditional medication. 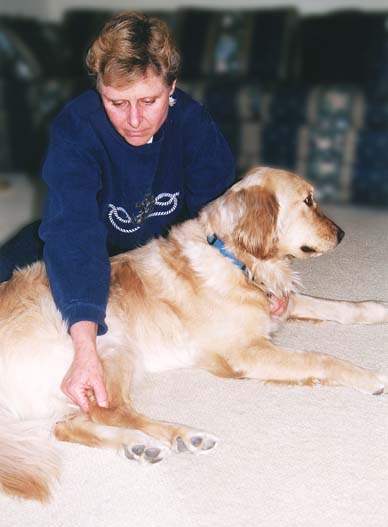 The concept of acupuncture is that it helps to rebalance and harmonise Qi. This in simplistic terms is the internal body life force.  In TCM, imbalance of Qi is considered to result in illness due to disharmony of yin and yang, the two forces which represent the dynamic nature of life.

Acupuncture involves the stimulation of certain precise areas of the surface of the body that have a direct relationship with internal organs. These surface points are linked to form specific meridians each one of which corresponds to the functioning of a particular organ or system. By stimulating these specific points with fine acupuncture needles (or sometimes a laser) it is believed that the imbalance between yin and yang can be restored and thus Qi is harmonised.

How does it work?

(i)      Stimulation of nerves which inhibit the transmission of pain impulses

(ii)     As a result of stimulation of the nerves natural endorphins are released. These are substances that increase the feeling of well being (euphoria) and prevent pain being felt (think of them as natural pain killers)

© Copyright 2016 LifeLearn Inc. Used and/or modified with permission under license.

View All
Browse Our Library Of Resources Pet Health Library

WE’RE PROUD TO SERVE YOU!

"We would like to say a massive thank you to you all for the love and dedication you gave ‘Chubba’ over the last 18 yrs. We know that everything you ever did for him was of the highest level of care possible."